UPDATE: I now use terraform to reduce the cost of SSD with a snapshot and automatic deployment. mode details here

This is my first try to setup a headless remote desktop on google cloud compute engine.

This is what we talking about, xfce in google cloud compute engine desktop. 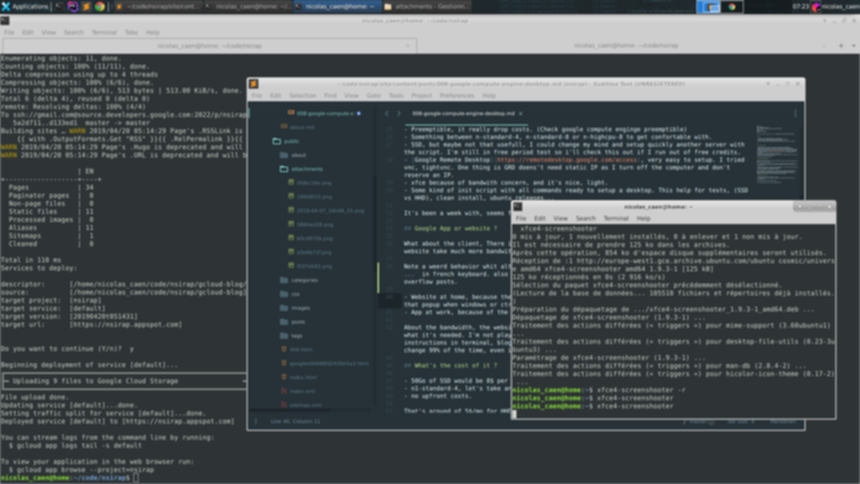 It’s been a week with, seems fine.

What about the client, There is a difference between the app and the remote desktop website, the website take much more bandwidth.

Note a weird behavior whit alt-gr key, need to press a longer time that usual, useful for | @ ... in french keyboard. Also need to be activated in keyboard setup as seen on several stack overflow posts.

About the bandwidth, the website act like he need to send a lot every time, the app send just what it’s needed. I’m not playing games, I almost just write. Write code, command line instructions in terminal, blog post in sublime text that’s mean 99.9% of the screen doesn’t change 99% of the time, even if I was the fastest coder in the world.

I’ll come back here once I’ll get more insight about cost. Now, I’m using a SSD, but paying only when the computer is on with Terraform: mode details here

HHD is a bit slow when coding with PhpStorm, but 50Go of SSD is costy. I’m trying a 20Go SSD and changed xfce for cinammon. Cinammon take more CPU resources than xfce, so I’m trying the n1-standard-8 instead, still in preemptible mode for cost reasons.

I just bought myself a chromebook, an acer R13, this was the original idea, a powerful headless with a light frontend terminal. It works fine but I haven’t done some serious coding sessions yet.